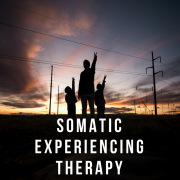 A person very close to me was involved in a head-on collision as a young man. Riding a motorcycle late at night he was struck by a drunk driver who pulled out of his lane to pass a car. It was so sudden; the young man barely had time to react but managed to avoid a dead-on impact and was struck only by the fender and mirror of the car. His motorcycle was destroyed and he spent four months in hospital. After recuperating and while driving a car with friends they noted that when a car approached from the opposite lane he always unconsciously steered the car as far as he could go toward right shoulder of the lane. His friends responded with a lot of good-natured kidding that involved re-telling of the incident and a kind of re-experiencing the event. There was a lot of laughter and a deep sigh of relief from the young man. He was able to release the automatic bodily response and went on to drive normally. This is what Peter Levine, PhD psychologist author of “In an Unspoken Voice: How the Body Releases Trauma and Restores Goodness” refers to as “somatic experiencing”.
Drifting a little to the right on the highway may not constitute a major psychological trauma response, but what about PTSD or a serious physical attack or mental abuse that leaves the sufferer incapacitated? How is a person helped to recover from such an emotional burden? That is the domain of the psychological work of Somatic Experiencing. The practitioner of Somatic Experiencing Therapy undergoes years of training and is required to bring a special depth of empathy to work with people suffering from trauma who may not even know or remember the precipitating events of their psychological and somatic stress condition. It is the job of the therapist to help the person work through the sometimes convoluted wilderness of this psychological condition to bring her to a safe confrontation with the event and resolve it in a natural and comfortable fashion. This may involve movement exercises, storytelling or revisiting the original trauma in a structured, safe setting. Men, women and children are all susceptible to traumatic events with varied capacities to understand and work through the process of healing. The culmination of therapy is the release of the physical and mental symptoms of trauma and the satisfactory resolution of the original event. As Doctor Levine discovered originally, animals normally respond almost automatically to stress with various physical movements and actions. Recovery does not require complex intellectual achievements but is rooted in body movement primarily, thus, “somatic”. With the combination of a deep understanding of the mind-body relationship and patient and kind guidance, Eastside Center for Family therapists employing Somatic Experiencing can help you to overcome the ill effects of trauma at any stage in life.

Want to join the discussion?
Feel free to contribute!

Eastside Center for Family is licensed by the State of Washington Department of Behavioral Health and Recovery (DBHR).

The foundation of our approach to treatment and all forms of counseling in our office is one of respect, empowering people to make their own choices. We take time to listen carefully and identify with a person problem maintaining behaviors and look for workable solutions.

© Copyright 2018 East Side Center for Family | All Rights Reserved. Designed by MarmonDesigns.